Components were assembled on a specially designed shock test board (STB) with either copper organic solderability protectant (Cu OSP) or electroless nickel immersion gold (ENIG) surface finish on its lands, using 12 different BiSn metallurgy solder pastes from leading suppliers in the industry. Three of the solder pastes were `baseline` BiSn eutectic solder pastes with varying amounts of Ag. Four were of the joint reinforced paste (JRP) type, which created polymeric reinforcement around the solder joints near the PCB land. The remaining five solder pastes were termed `ductile BiSn` because they were developed specifically by the suppliers to enhance their ductility by various metallurgical strategies [1].

The solder paste with the better reliability was different for the two surface finishes. Solder Joints formed on ENIG surface finish lands using the BiSn baseline paste exhibited higher shock drop resistance than those formed by the ductile BiSn solder paste, even though the solder metallurgy in the this paste was designed to impart higher ductility to the solder joints. For solder joints on Cu OSP lands, the ductile BiSn pastes were, as expected, more reliable than the BiSn baseline solder joints.

A metallographic analysis of the failed solder joints ascertained location of the cracks, their propagation paths, and characterized microstructural features close to the cracks. Results indicated all failures occurred close to the solder-to-board land interface. The diminished reliability of solder joints on the nickel-gold based surface finish was determined to be due to the crack propagation pathway between the intermetallic compounds and the Ni(P) layer. For the copper surface finish, the crack pathway was within the solder just above the intermetallic compound layer, and this resulted in a higher shock resistant solder joint. Bi wt% analysis in the crack region revealed that the enhancement of the solder ductility by minor quantities of elemental additions more than compensated for the higher localized Bi wt% concentration near the board lands, improving the solder joint shock reliability. 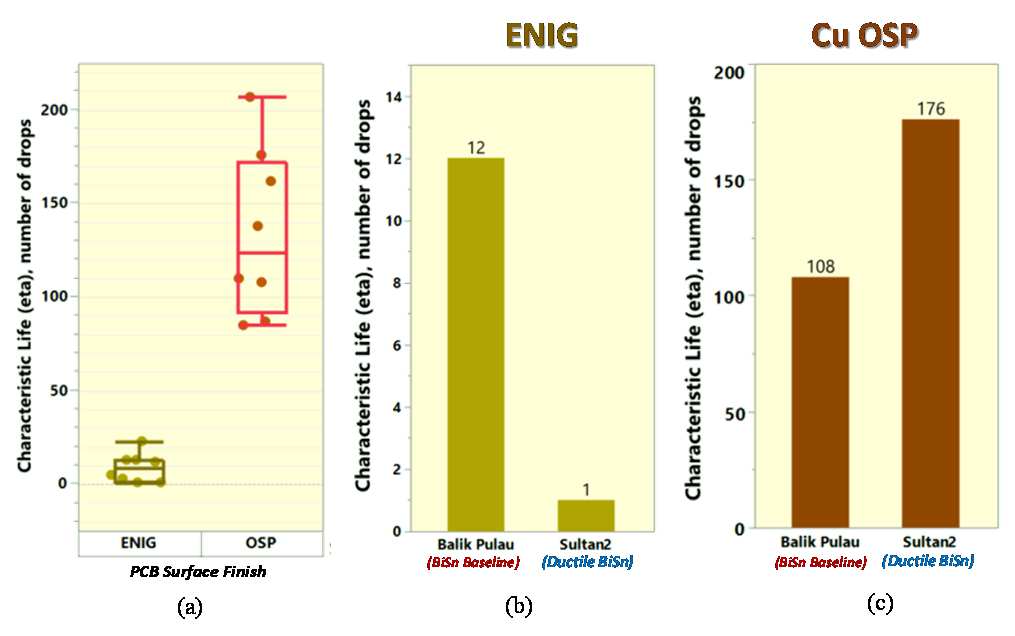